Back to all posts

Well after almost 24 hours of travel we have arrived in London by way of Amsterdam. Busses, 2 planes, a large sprinter van and security checkpoints and more security checkpoints and a long wait at London Heathrow airport with our work visas. The officer introduced us to the other officers as AC/DC. Okay it could have been… ( hmmm I was going to pick another band and I would have offended someone I like so choose your own answer and insert it here)________________________. Finally outside and waiting for our sprinter van. When it arrived our great driver, Stuart, pulled into a “busses only” lane. He got out and opened the back and no sooner had he done that than another security guard came over and told him had to move and was not allowed to load us in there no mater what!! As Stuart complained that he didn’t know how to get to the other section the guard grabbed him by the arm and pulled him to a vantage spot in front of the van to show him how to get out and around to the other section. We quickly loaded the van and hopped in and Stuart came back and we drove away!

Off to the Hotel Lilly. Cute small rooms ( had to open my suitcase on the bed). In the room trying not to fall asleep and falling asleep quite by accident. You want to make sure you stay up so you can adjust to the time change better. I woke up with a start and wondered where I was for a second. Not unusual these days I am wondering where I am quite often. Hah!

After leaving the hotel looking for someplace to change my US dollars for British Pounds for and amazing mark up fee, then met up with my amazing niece her her equally amazing husband. Amazing! Such a great time in a pub, a coffee shop, a vegan restaurant, and another pub talking about high school education, The Beatles, Howlin Wolf, family mythology, and how the bird called a swift leaves the nest as a juvenile and then spends 3 years never touching anything solid 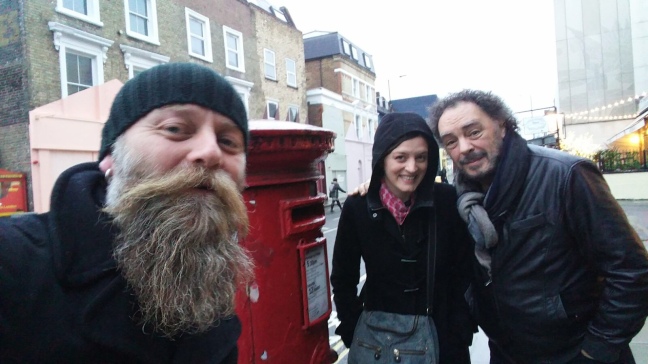 . Wow…flying, eating, sleeping, and…we’ll…you get the picture. Made me think of being a touring musician. They are both brilliant and spectacular human beings. Check out their music….Morning Bride…and Mark’s site to raise funds to save birds….Just Giving

Great show in London then crawl through Heathrow Airport to get to Germany and…….”The Bus”….dun dun Dunnnnn…….